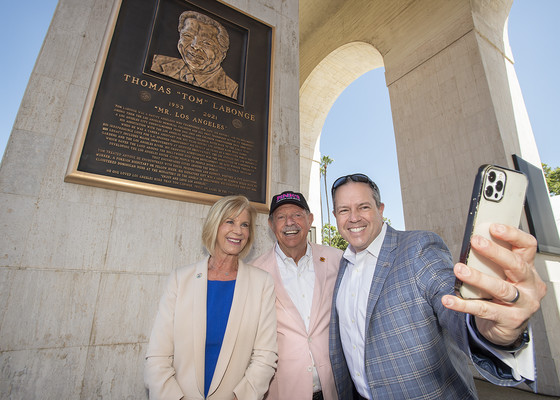 Los Angeles, CA — This afternoon, friends, colleagues, and loved ones of the late Los Angeles City Councilman Tom LaBonge gathered at the Los Angeles Memorial Coliseum for a ceremony unveiling a plaque dedicated to LaBonge at the Coliseum’s Court of Honor.

“Tom was a cheerleader for Los Angeles,” said Supervisor Janice Hahn, who served alongside LaBonge on the LA City Council and nominated him to the Court of Honor. “He loved everything about this city. It is fitting that generations to come will walk around the legends of the Court of Honor, see this plaque, and learn about the one and only Mr. Los Angeles.”

Councilman Tom LaBonge, who passed away in January 2021, was a longtime supporter of the Los Angeles Memorial Coliseum. He attended Coliseum Commission meetings long after he retired from the City Council and raised funds for other Court of Honor honorees. He even worked as an NFL sideline photographer at several games at the Coliseum.

In her closing remarks, Brigid LaBonge told the crowd, “I ask you to go forward in joy and happiness and go do something Tom would do – whatever it is you think Tom would do.”