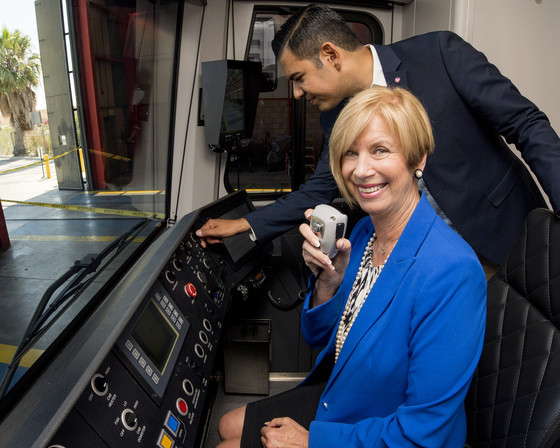 “These jobs and opportunities at Metro should be open to everyone, regardless of what language they are most comfortable speaking,” said Supervisor Janice Hahn. “Spanish speakers have been here throughout our history, and have been key to making Los Angeles County thrive. They ride Metro, they are excellent candidates for these jobs, and they should not be excluded.”

Hahn believes Metro’s own workforce should reflect the communities it serves. However, long-standing hiring policies have required applicants to read, write, and understand English and have prevented many people for whom English is a second language from applying. A new program, Bienvenidos a Metro, will offer flexibility with this language requirement and expand employment opportunities to Spanish-speaking residents.

Today, at Metro’s Board of Directors meeting, Hahn touted the importance of the new Bienvenidos a Metro program and co-authored a motion, authored by Mayor Eric Garcetti and co-authored by Supervisor Hilda Solis, Supervisor Holly Mitchell, and Metro Director Fernando Dutra, which directs Metro to work with the County of Los Angeles to improve outreach to Spanish language media and explore partnerships with the Office of Immigrant Affairs.

This initiative could be an important tool in Metro’s efforts to tackle an ongoing shortage of bus and rail operators which has forced Metro to reduce bus and rail service.

Metro will conduct a feasibility study during the first year of the program’s launch to identify languages in addition to Spanish that the program should expand to include in order to improve Metro’s recruitment of potential bus and train operators.