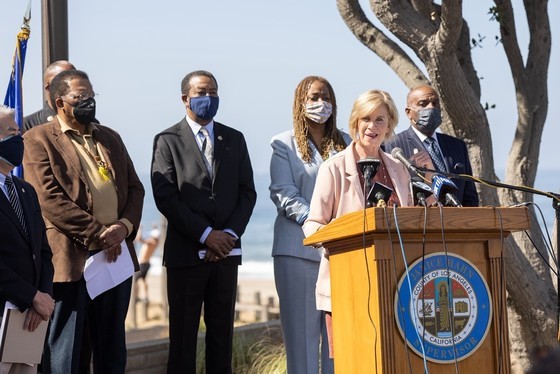 Los Angeles, CA – Los Angeles County Supervisor Janice Hahn has released the following statement regarding the upcoming transfer of the Bruce’s Beach property from the County of Los Angeles to the great grandsons of Willa and Charles Bruce:

“It’s finally happening. On Tuesday, the Board of Supervisors will vote on transferring Bruce’s Beach to the Bruce family. At long last, the descendants of Willa and Charles Bruce will be able to begin rebuilding the wealth that has been denied to generations of Bruces since their property was seized nearly a century ago. We will never be able to rectify the injustice that was inflicted upon the Bruce family, but this is a start, and it is the right thing to do.”

In 1912, an African American couple named Willa and Charles Bruce purchased prime beachfront property in Manhattan Beach and started a successful beach resort that became known as Bruce’s Beach. It was one of the few places in Southern California where Black residents could enjoy a day at the beach.

In 1924, prompted by a petition from local white real estate agents and other civic leaders, the Manhattan Beach City Council voted to condemn Bruce’s Beach and the surrounding land through eminent domain to build a park. It is well documented that the real reason behind the eminent domain process was racially motivated with the intention of bringing an end to the successful Black business in the predominantly white community.

At the time that the Council voted to condemn the land, it also put new laws on the books that prohibited resort-type businesses in that area, effectively prohibiting the Bruce family from purchasing other beachfront property for a resort. In 1929, the court awarded their property to the City of Manhattan Beach through eminent domain.

Through a series of land transfers between the City of Manhattan Beach, the State of California, and the County of Los Angeles, the County acquired the land that was originally owned by Charles and Willa Bruce in 1995. It is currently the site of the County’s Lifeguard Training Headquarters.

In April 2021, Los Angeles County Supervisor Janice Hahn announced her intention to return the Bruce’s Beach property to the living descendants of Willa and Charles Bruce. However, at that time the County was unable to transfer the property due to limitations placed on the land by the State. At Hahn’s request, Senator Steve Bradford introduced SB796, legislation that would lift State restrictions on the property and allow the County to transfer the land to the descendants of Willa and Charles Bruce. SB 796 passed both the State Senate and Assembly with unanimous support and was signed into law by Governor Newsom on September 30, 2021 at Bruce’s Beach, allowing the County to move forward with plans to transfer the property to the Bruce family.