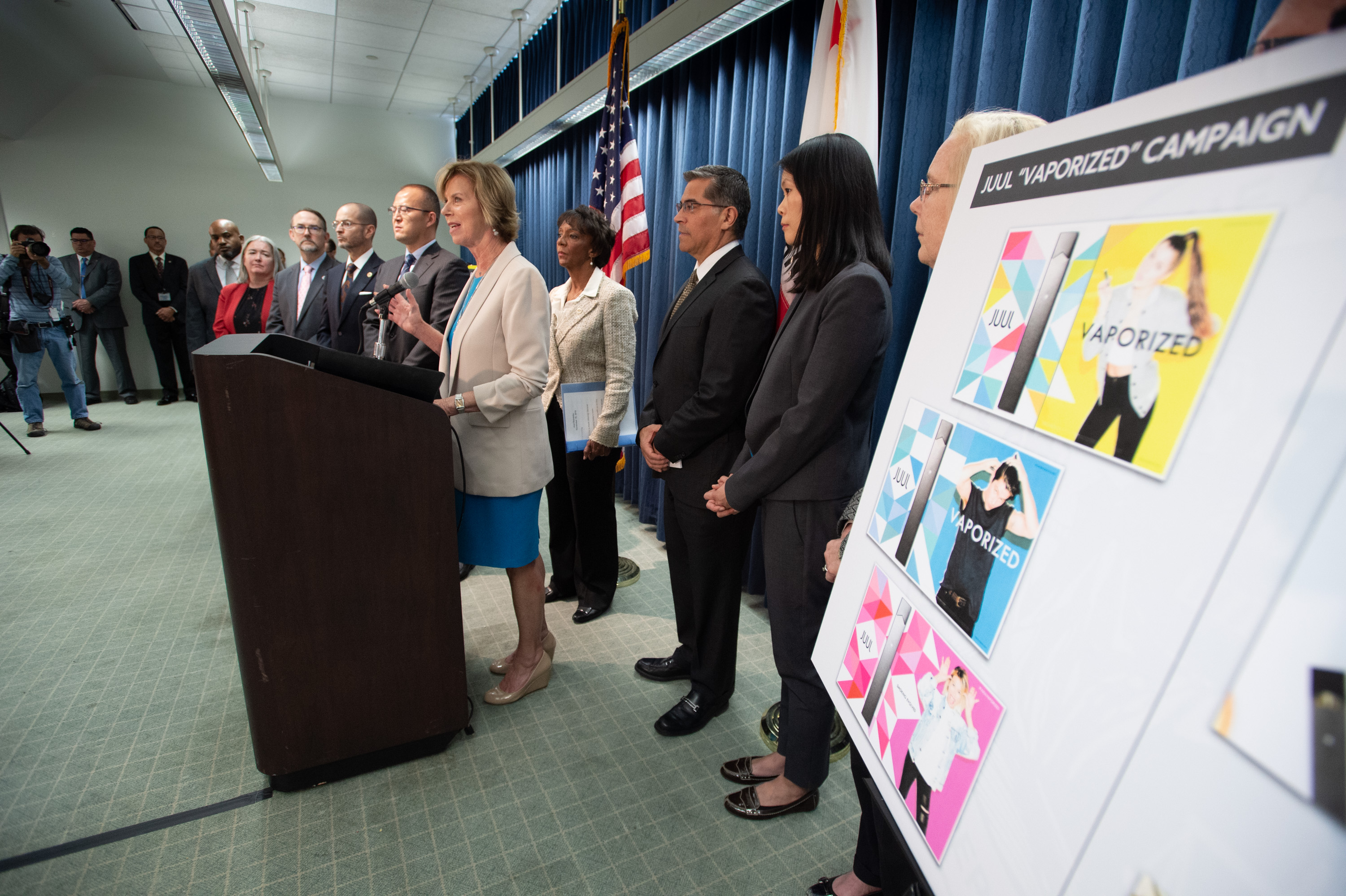 The lawsuit alleges that—contrary to the company’s claims that its product is aimed only at adults – JUUL targeted young people through advertising and failed to give warnings about the product’s chemical exposure and risks for cancer, birth defects, and reproductive harm. It also alleges that JUUL unlawfully failed to verify the age of California consumers and then violated the privacy rights of minors by keeping the personal email addresses of underage individuals who failed age verification on their website and using those email addresses to send them marketing materials.

“Nearly 1 in 10 high school students in LA County report using e-cigarettes. That is not by chance,” said Supervisor Janice Hahn. “JUUL has systematically targeted the teen market with everything from the design of their products to their advertisements. With this lawsuit we are going to hold JUUL accountable for their hand in this public health crisis and do what we can to stop this company from creating a new generation of nicotine addicts.”

“We’ve worked too hard, committed our hard-earned money for too long combatting harmful tobacco use to stand idly by as we now lose Californians to vaping and nicotine addiction,” said Attorney General Becerra. “JUUL adopted the tobacco industry’s infamous playbook, employing advertisements that had no regard for public health and searching out vulnerable targets. Today we take legal action against the deceptive practices that JUUL and the e-cigarette industry employ to lure our kids into their vaping web. We will hold JUUL and any other company that fuels a public health crisis accountable.”

“Our goal today is to safeguard the health, development and well-being of children, teenagers and young adults throughout California and the nation,” said District Attorney Lacey. “JUUL and other nicotine product makers must be held accountable when they knowingly fail to take the necessary protective measures and allow the sale of nicotine products to underage buyers. California and Los Angeles County have long been leaders in the fight against tobacco and nicotine use. This lawsuit takes that fight to a new front, against a new threat. We will stay vigilant. We will aggressively prosecute offending vape and tobacco companies. And we will win this battle.”

The use of flavored e-cigarettes, or vaping, by young people in the United States, including middle and high schoolers, continues to increase rapidly, according to reports from the U.S. Centers for Disease Control and Prevention and the Food and Drug Administration. JUUL sales have grown dramatically and now make up more than 64 percent of the U.S. e-cigarette market. Smoking remains the number one preventable killer in the United States and causes over 480,000 deaths per year. Medical researchers have shown that many JUUL users continue to smoke cigarettes and that children who were not likely at risk to start smoking cigarettes have done so as a result of their use of nicotine-containing e-cigarettes. Further, as of November 13, 2019, the CDC reported 42 deaths in patients with e-cigarette or vaping product use, with a further 2,172 cases of associated lung injury reported nationwide. Four of the deaths reported were patients in California.

Today’s lawsuit, filed in the Alameda County Superior Court, alleges that JUUL’s viral marketing campaigns led millions of American youth to start vaping or “JUULing” without knowing the potential harms associated with nicotine or, in many cases, that the product even contained nicotine. JUUL launched its sponsored promotional events in cities across California and elsewhere to distribute free samples of JUUL devices and their flavor pods to a young, trend-setting audience. The company engaged in a targeted social media campaign by marketing flavors that appeal to youth, such as mango, cool mint, crème brûlée, and cucumber.

JUUL devices work by heating up a cartridge or “pod” containing liquids to create an aerosol, often called a vapor, that users inhale. The liquid contains nicotine, flavorings like mint or mango, and many other chemicals. The cartridges are small, potent and convenient. They plug into a USB drive and emit a small cloud of vapor when inhaled. Their use is hard to supervise and keep out of the hands of adolescents because the devices are easily concealed.

JUUL was founded and launched in 2015. Before that, the founders studied the “Truth Tobacco Industry Documents,” internal tobacco industry corporate documents obtained during litigation between the state attorneys general and the tobacco industry. The documents include information on nicotine formulations and advertising techniques used to sell cigarettes. Since JUUL’s launch in 2015, youth vaping in the United States has almost doubled. From 2017 to 2019, e-cigarette use among high school students rose by 135 percent. In 2019, five million middle and high school students used e-cigarettes – an alarming increase of nearly 3 million students in two years. The majority of underage e-cigarette users report that JUUL is their usual brand.

• Failing to include required warnings about exposure to chemicals linked to cancer, birth defects, or other reproductive harm.
• Delivering tobacco products directly to underage persons.
• Delivering tobacco products directly to consumers without properly verifying their age.
• Violating the privacy rights of minors by sending marketing material to the email addresses of underage individuals who failed age verification on JUUL’s website.
• Creating a public health epidemic, particularly among young people, with an addictive and harmful product. This epidemic has had serious negative effects on public schools across the state.

This lawsuit is only the latest action taken by the Los Angeles County Board of Supervisors to combat the growing problem of underage e-cigarette use. In September, the Board approved a landmark ban on the sale of flavored tobacco products in unincorporated areas of the County and subsequently launched a targeted public health campaign to educate young people on the dangers of vaping.

You can read a copy of the complaint here.