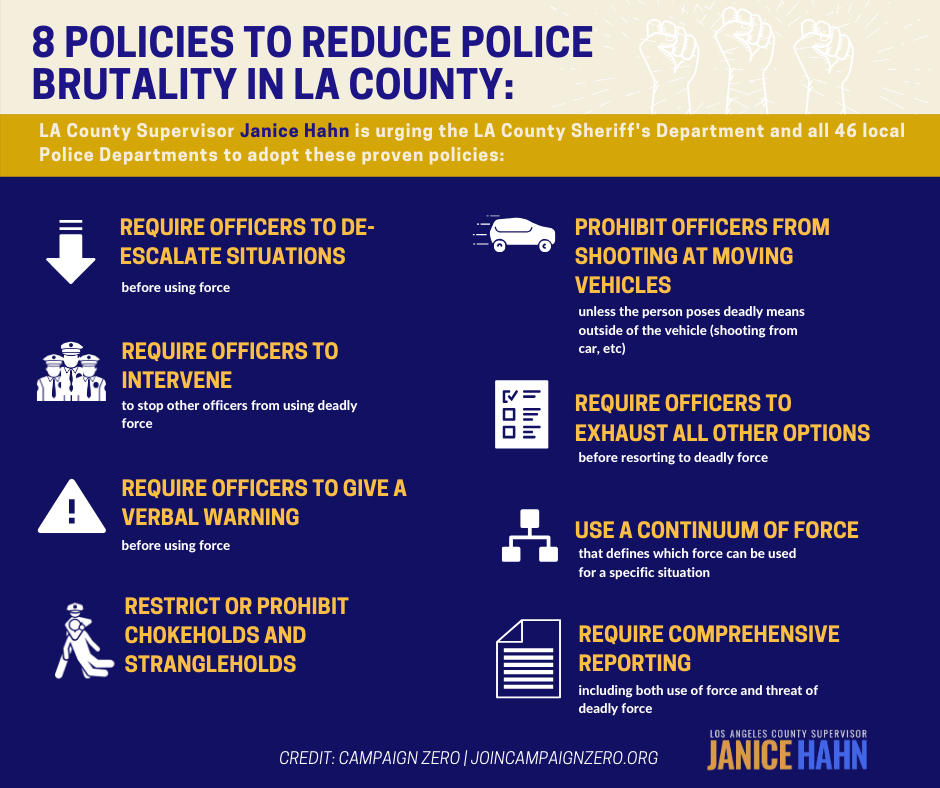 Responsible Policing and Use of Force Reform in LA County

For decades, systemic racism, implicit bias, and excessive use of force have resulted in the disproportionate killing of black men and women by police.  Even though black Americans make up 13% of the U.S. population, they account for 26% of all people who were shot and killed by police from 2015 to 2019.  While law enforcement agencies play an important role in protecting public safety, it is imperative that reforms be made to protect the lives of the civilians that they encounter.

However, research has shown that changes made to department policy can lead to decreased uses of force by law enforcement officers. The anti-police brutality organization Campaign Zero has identified eight reforms to use of force policies that have been shown to reduce the number of officer-involved killings.

Each of these eight reforms was associated with a 15% reduction in police killings for the average police department -- put together, they reduced police violence by 72%. Importantly, departments with more restrictive use of force policies also experienced lower rates of assaults on officers and officers killed in the line of duty.

While there are law enforcement agencies in Los Angeles County that have made significant steps toward reform, no local law enforcement department has adopted all eight of these policies.

“The people are demanding change,” said Supervisor Janice Hahn. “These are eight steps that can be taken right now by all of our law enforcement departments that are proven effective in reducing the number of people killed by police and sheriff’s deputies. Most of the police departments in LA County have already implemented one or two of these policies, but no one has implemented all eight.  I am calling on our Sheriff and all of our local police chiefs to update their use of force policies to include these important restrictions to use of force.  We cannot wait any longer.”

Across the nation, people are rising up to say that they have had enough of the senseless killing of unarmed black men and women at the hands of the police. It is time for law enforcement departments across Los Angeles County to evaluate their own use of force policies and update them to make meaningful progress in preventing the use of unnecessary lethal force by their officers.

Supervisors Hahn and Ridley-Thomas have filed a motion to be voted on Tuesday, June 9th by the Los Angeles County Board of Supervisors.

If the motion passes, the Board of Supervisors will:

Read the full report on why these 8 policies are so important in every one of our law enforcement departments across LA County.